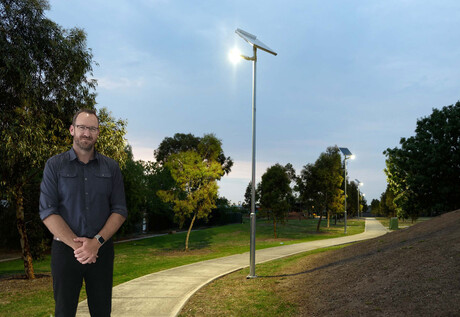 The developer of a smart masterplanned community in Tampa, Florida — Metro Development Group — has chosen Melbourne company Leadsun to deliver solar street lighting projects in smart US cities, with more than 10,000 lights to be installed across America’s first ‘futuristic cities’ over the next few years.

Part of a Connected City, the community of Epperson is said to boast the fastest internet in America and is home to testing of autonomous vehicles and security robots.

“They wanted an off-the-grid street lighting solution that was modern, smart and sustainable. And also, because it was in Florida, we had to make sure they were engineered and robust enough to withstand their hurricane season, where wind speeds can reach up to 150 mph,” Pollard said.

Leadsun’s development team in Melbourne is reported to be the first in the world to design and patent an all-in-one smart solar light that combines LED, lithium batteries and wireless technology — enabling the lights to store power for days on end and be remotely controlled and monitored from anywhere in the world.

Metro Development Group Vice President of Operations Kartik Goyani said, “We wanted to make sure that in such a unique and technology-advanced community, streetlights were not just conventional, old ones connected to the grid.

“You know we call these the ‘green lighting machine’ so the green aspects — the solar, being off the grid, and the ability for us to connect and control these remotely pretty much from anywhere in the country — is something that is groundbreaking and I don’t think any other manufacturer offers that,” he said.

Leadsun has worked with councils and organisations throughout Australia to deliver public lighting projects for the past 15 years — including Australia’s longest solar-lit pathway in Goulburn, NSW, and providing public lighting around Rod Laver Arena during the Australian Open.

“The lighting is more cost-effective and it helps improve community access to public areas and security. Now, with Florida, we’re seeing solar lights are the future for masterplanned communities as well,” Pollard said.

Goyani added, “We can dim these at night at 11 o’clock and then magically at 5 am, or if the motion sensor picks up anyone walking by, they come on.

“I would say not only Australian developers but everyone throughout the world should be looking at these. This is what our planet needs and it’s phenomenal technology,” he said.

Three major wind and solar farm projects in Western Australia have connected to the Western Power...

Victoria Avenue Public School in Concord West has become one of the first schools in Sydney to...

183 Australians lost their lives while at work in 2019

ABB and IBM to bolster cybersecurity for industrial operations

Peripheral nervous system may play a role in autism

Treating coughs by targeting the brain